The minimum flow in Nam Ton watershed was measured twice. Once in January 2012 and once in April 2014. From the campaign January 2012, it shows that the Base Flow in the whole basin depends nearly only on what happened in the Upper Part of the Watershed. This leads to express 2 key Watershed Approach : (i) Water Conservation related activities should be focused in priority to the Upper Part of the Watershed; (ii) Investments and Development projects will generally be less impacting the water related natural resources if developed downstream rather than upstream.

The following figure is the result of the April 2014. Sub-watersheds have been drawn on a  sketch and on the map  in such a way that the outlet of the sub-watersheds corresponds to the staff gauges positions. This allows estimating the flow at the outlets of these watersheds which is one requirement for further calibration of models. On the same figure, the minimum flow as measured on 22 April 2014 is shown as well. Minimum flows are much lower than in January 2012 and shows a greater contribution from the drainage downstream (drainage can be tributaries, drainage from irrigated paddy fields or contribution from groundwater) 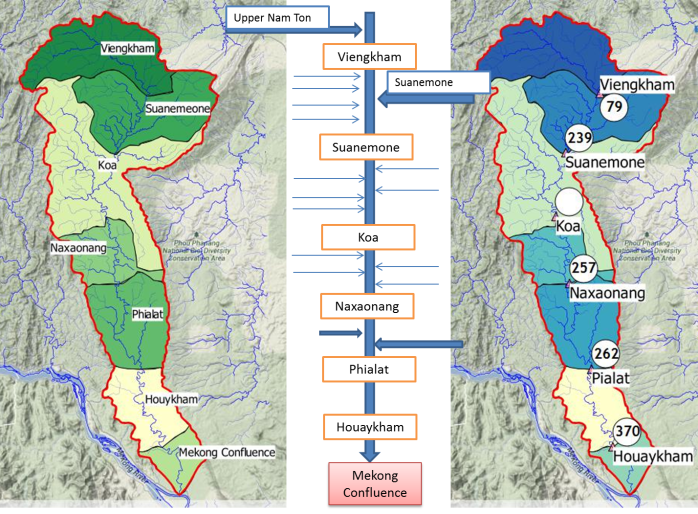